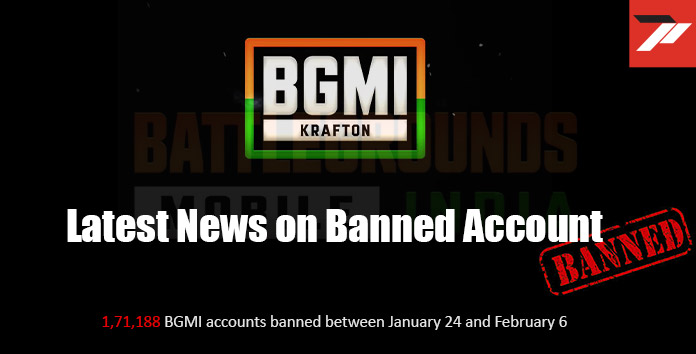 In the two weeks leading up to February 6, Krafton Banned BGMI account over 170,000 Battlegrounds Mobile India (BGMI) accounts. All of the accounts were banned as part of the company’s stringent anti-cheating policies. Back in December, the business declared that cheating devices will be permanently banned.

Between January 24 and February 6, Krafton banned 1,71,188 BGMI accounts, according to an official blog post. The corporation has also provided a list of all the accounts that were banned over the two weeks in question, in addition to disclosing the number of banned accounts.

“Battlegrounds Mobile India will attempt to apply tough punishments with the ultimate objective of eliminating the usage of illicit applications in order to offer you with a pleasant gaming experience,” Krafton writes in the blog post.

also read:How to get a free Poseidon X outfit in Battlegrounds Mobile India

If Krafton discovers gamers playing an unauthorised version of the game obtained from an illegal source, it will ban their BGMI accounts. It also disables accounts if it is discovered that users are using any auxiliary programs/cheats to get an advantage in the game.

All 1,71,188 BGMI accounts that were banned between January 24 and February 6 were likewise banned on the cheating devices. Back in December, Krafton declared that gadgets used by users to cheat in BGMI, as well as their accounts, will be banned. Previously, the business simply banned accounts that were used to cheat in the game.

Is BGMI banned in India?
No BGMI not banned in India. The BGMI banned account when on players found to be cheating and downloading the game from unofficial channels. BGMI has announced that these accounts will be permanently removed from BGMI they cannot play anymore.

On Battlegrounds Mobile India, what might get you banned? (BGMI)

1. If a player is caught using illicit tools on any device, he or she will be banned. The device will be permanently banned from utilising BGMI as a result of the newly implemented security logic.

2. A powerful cheat detection and banning system that enables for real-time monitoring of cheaters and the banning of players that use unlawful tactics.

3. If you have temporary bans, they will be replaced with Permabans, or permanent bans, by the game.

4. Manual verification and banning of high-ranking accounts that use or promote illegal applications. These accounts are watched in real time, and if any illicit programmes are discovered, they are permanently banned.

5. You will be banned from YouTube if you submit any material that contains illegal programming.