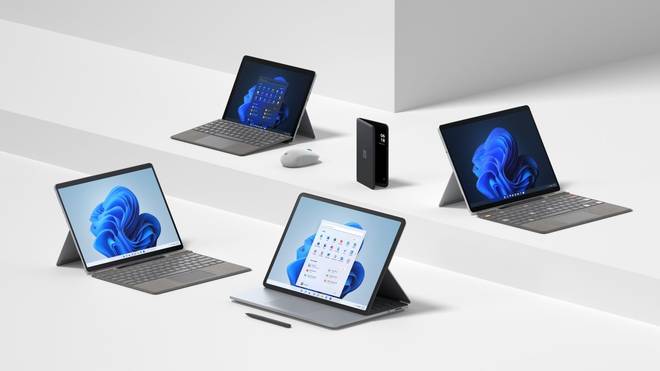 Microsoft devices has revealed a number of hardware products expanding its Surface device line. The technology giant unveiled its latest laptop, 2-in-1 mobile devices and a dual-screen smartphone of the second generation.

The Surface Laptop Studio, Microsoft’s latest flagship laptop, has a 14.4-inch PixelSense Flow touchscreen display with up to 120Hz refresh rate and Dolby Vision compatibility. It features a novel ‘Dynamic Woven Hinge,’ which contains integrated wires that can bend 180 degrees and allows the gadget to switch modes.

The gadget has a touch-screen interface and can be used as both a laptop and a tablet. It is powered by quad-core Intel Core H35 CPUs and NVIDIA GeForce RTX GPUs from the 11th generation (in i7 models). It may be configured with up to 32GB of LPDDR4x RAM and a 2TB SSD. Two USB 4.0 ports with Thunderbolt 4 compatibility, a Surface Connect connection, a front-facing camera with 1080p resolution, twin far-field Studio Mics, and Quad Omnisonic speakers with Dolby Atmos are all included in the gadget.

Surface Pro has been redesigned.

The new Pro 8 gadget is more than twice as quick as the previous version. this Microsoft devices has a 13-inch PixelSense Flow touch display with a refresh rate of up to 120Hz, as well as Dolby Vision and Adaptive Color Technology.

The hybrid gadget has a built-in kickstand that rotates almost 180 degrees and combines the flexibility of a tablet with the power of a laptop. It is powered by quad-core Intel Core 11th Gen CPUs with Intel Iris Xe Graphics and has a battery life of up to 16 hours.

The Go 3 is the most portable 2-in-1 in the Surface lineup, thanks to its low weight and compact size. It features with a 10.5-inch PixelSense display that is protected by Corning Gorilla Glass 3 and a kickstand that can be adjusted. The Intel Pentium Gold or Intel Core i3 processors, as well as Intel UHD Graphics 615, are available in the Go 3.

The 2-in-1 gadget has a battery life of up to 11 hours and is perfect for daily activities such as scribbling down ideas, surfing, and even streaming. It features Dolby Audio-enhanced twin far-field Studio Mics and stereo speakers.

The Go 3 has two 1080p cameras: a 5MP front-facing camera and an 8MP auto-focus camera on the back. It supports up to 8GB of LPDDR3 RAM and 128GB of SSD storage. The tablet also supports Microsoft Pen Protocol and may be used to draw or mark up documents when connected with a Surface Pen.

The Qualcomm Snapdragon 888 5G Mobile Platform powers the foldable smartphone, which also features a dynamic triple-lens rear-facing camera system that can take vivid, high-quality images and 4K video. A 12MP wide lens, a 12MP telephoto lens, and a 16MP ultra-wide lens are included in the system. There is also a 12MP front-facing camera on the smartphone.

also read: How to Get Windows 11 On PC? Right Now!

The program pairings and multitasking features of the dual-screen smartphone allow users to launch and view any two applications on either screen to quickly compare or copy and paste information. Furthermore, high-resolution touchscreens can provide consumers with an exciting reading and gaming experience.

The Duo 2 comes with dual speakers, dual-mic AI-based noise suppression and acoustic echo cancellation, NFC for contactless payments, and a glance bar on the smartphone’s spine that features incoming calls, texts, and battery charge status. The Android-powered tablet comes in two colour options: Glacier and a new Obsidian, with 8GB DRAM LPDDR5 memory and up to 512GB storage.

The majority of the items revealed during Microsoft’s presentation will be accessible beginning Oct. 5, according to the firm.