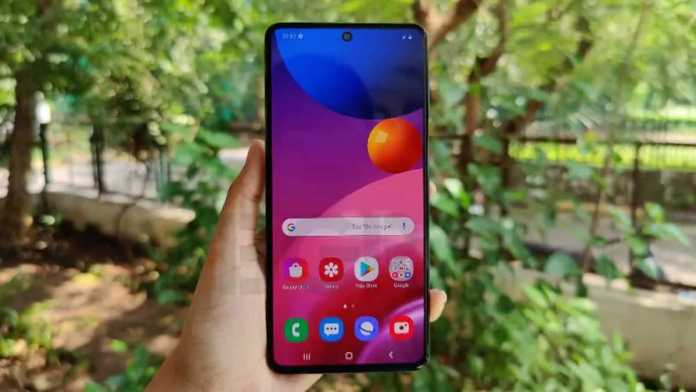 for Samsung Galaxy M52 5G will be available for purchase in India on September 19. A upcoming smartphone was just teased on Amazon India’s website for the first time. The site has also revealed the debut date.

The retailer will make an announcement about the upcoming smartphone on its online site this Sunday. The website for the Samsung Galaxy M52 5G divulges that the phone will have “smoother display”, which indicates the screen refresh rate will be greater. It will also have a 120hz screen refresh rate at a reasonable price.

Samsung Galaxy M52 has been teased.

The Samsung Galaxy M52 5G has not been launched, but the smartphone has yet to provide details about it. The smartphone promises that this smartphone will be a “unstoppable monster,” which alludes to the Galaxy M52’s powerful battery and CPU.

Samsung’s upcoming product will follow up the Galaxy M51, which launched in India in 2018 at a starting price of 24,999 rupees. It is expected that the upcoming Samsung smartphone would be comparable in pricing.

According to the M52 specifications, leaked Samsung Galaxy phone data

According to Samsung’s Galaxy M52 launch, specifications have been leaked. The 6.7-inch Super AMOLED display is known for its 120Hz refresh rate, 1080 x 2400 pixel quality, and Gorilla Glass 5 protection. The upcoming smartphone will have 8GB of RAM and 128GB of internal storage powered by the Snapdragon 778G SoC.

In terms of  camera specifications, a triple back camera system consisting of a 64-megapixel primary. With a 12-megapixel ultra-wide angle and a 5-megapixel depth sensor is anticipated to be available with the Samsung Galaxy M52 5G. The smartphone has a 32-megapixel camera for selfies and movies. One UI 3.1 with Android 11, a 5000mAh battery, and quick charging are some of the main features of the upcoming Samsung smartphone.