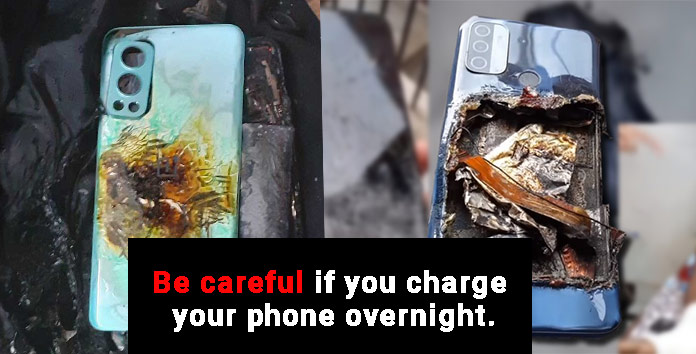 Phone battery explosions have been a typical occurrence in recent years. The most recent incident included the OnePlus Nord 2 smartphone exploding and severely injuring the owner. Recent reports of the OnePlus Nord 2 exploding have been made since the device’s introduction earlier this year. In most cases, the corporation said that the fault was on the customer’s end and that the product was safe to use.

According to OnePlus, all smartphones from all manufacturers undergo a variety of quality and safety testing, including many degrees of pressure and impact. There are, however, certain outliers, as seen by the controversial Samsung Galaxy Note 7.

Phone explosions may occur for a variety of reasons. Whereas one explanation might be a lack of quality control by the corporation, in other cases, customers are to blame. Given how regular phone battery explosion instances have grown in recent years, we’ve compiled a list of five possible causes.

Avoid doing the following 5 activities on your phone:

1. Damage to the gadget or battery on a physical level
A broken battery is one of the most frequent causes of a phone battery exploding. Frequently, when you drop your phone, the battery is damaged, resulting in a short circuit, overheating, and other problems. When a battery is damaged, it often swells, which may be seen by inspecting the back panel.

If you ever discover a battery swelling problem, send your phone to a repair shop immediately to avoid burns.

2. Use of an unofficial charger
This is one of the most frequent causes of battery burst events. While brands usually advise users to use authorized chargers, this is often avoided. Charging a phone using a charger other than the proprietor’s charger is always risky since third-party chargers sometimes lack the standards required for the mobile device. In most cases, inexpensive, uncertified chargers cause the phone to overheat, resulting in damage to the internal components, including the battery.

3. Charging overnight
That is correct. Overnight charging might sometimes result in a phone battery explosion. The majority of us have the habit of leaving our phones on charge overnight; this is really bad for the health of your phone. Charging over an extended period of time results in overheating, short-circuiting, and even explosion. As a result, some processors have an inbuilt capability to immediately cut off current flow when the battery is fully charged. However, some phones lack this functionality.
Solution: Avoid charging your phone overnight.

4. When a battery is exposed to water or direct sunshine,
Excessive exposure of the phone battery to direct sunlight or water might result in battery explosions. Excessive heat may damage the cells and create gases such as oxygen and carbon dioxide, causing the battery to enlarge and finally explode. As a result, it is preferable to avoid exposing the phone to direct sunlight.

Similarly, submerging a phone/any electrical gadget in water may destroy the internal components, including the battery, resulting in explosions. Certain phones now have IP certification, although the alternatives are restricted. IP certification does not imply that the phone can be immersed in any manner. There should be no electrical devices.

Solution: Keep your phone out of bright sunlight and away from water.

5 . Overloading the processor
Generally, the CPU might cause the phone to overheat as a consequence of multitasking and gaming sessions. Such heating concerns might result in battery damage, which can result in an explosion. To avoid such occurrences, OEMs have started including a thermal lock mechanism that prevents excessive heating.

Solution: Allow your phone to cool down for a few moments if it becomes overheated during multitasking or gaming sessions.